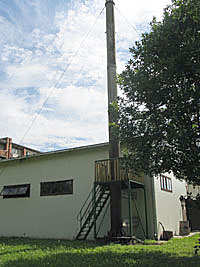 In 1999 “Brēķu studenti” Ltd. reached and agreement with the city council of Jēkabpils on heating dwelling houses of the former housing area of a sugar-refinery. Thus the boiler house the company already owned was transformed in a way that allowed heating with slivers and woodchips. In a year’s time we received an offer to heat another dwelling area. A new boiler room was built and heating and hot water supply was established.

Modern technology was used in the newly-built boiler house, which provides an automatic work regime, but the transformed boiler room is party mechanized. The capacity of each boiler room is 1 MW. In total the company currently heats approximately an area of 17 360 square meters.

To produce the woodchips used in heating, we purchased a Valtra 640 tractor with a chip crusher Farmi CH260 HF-2HM and a hydro-manipulator HK4061.